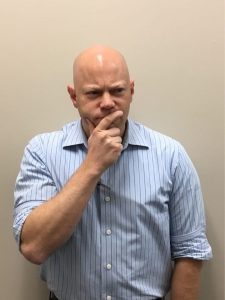 Q: Dear Jason, my boyfriend insists upon grabbing raw hamburger and chicken with his bare hands before throwing it on the grill, and then wiping his hands on his pants or shirt before moving on to prepare salads. I have begged him to wash his hands in between. He says it’s no big deal, I say he’s crazy. Please help us settle this argument.
-Cindy

A: Wow. I hope your boyfriend doesn’t work at a restaurant, Cindy. (If he does, you can let me know where in a separate email…*wink*)This reminds me of “The Curious Case of Sam and Ella’s Chicken Shack”* (see what I did there?). After receiving several complaints of bare hand contact with ready-to-eat food (which incidentally is the #1 thing that grosses me out, and is the subject of an entire forthcoming article) at this establishment, we made a few site visits and determined that several employees were, in fact, handling food with bare hands. After speaking to Chef Nora Firus*, it was discovered that employees had never been informed about the dangers of handling food with bare hands.  To really understand why this is so important, we have to know a little about the microbiology of the organisms we mainly deal with when handling foods:

–Norovirus-Commonly called stomach flu, or viral gastroenteritis, norovirus is the leading cause of vomiting and diarrhea in the United States. It is commonly spread by infected food service workers who touch ready-to-eat foods, or cleaned utensils. You can become infected with norovirus by getting feces or vomit from an infected person in your mouth…think about that for a second. We are talking about the leading cause of gastroenteritis in the U.S., and one of the major transmission routes is fecal-oral… Watch what foods go into your mouth, and WASH. YOUR. HANDS, KIDS. And if you happen to work at a food service establishment, if you think you have norovirus, go to the doctor, and DON’T GO TO WORK!

–Salmonella-One of the most prolific bacteria strains in existence. Salmonella is currently the leading cause of food borne illness in the United States. Salmonella is found mainly on chicken, but can also be found on other raw meats. It can be killed by proper cooking, and salmonellosis can be prevented by washing hands before and after handling raw foods, and keeping utensils clean and separated.

–Escherichia Coli O157:H7-Commonly known as E. Coli, this bacteria produces a toxin called Shiga toxin. A common complication with E. Coli is Hemolytic Uremic Syndrome (try saying that three times fast). The toxin can destroy red blood cells, and cause injury to the kidneys. E. Coli exists naturally in the gut of warm blooded animals (including you!) and can be spread from the feces of infected people and animals (that whole handwashing thing should be starting to make sense now, huh?) An E. Coli infection can be prevented by properly washing hands, and by avoiding the consumption of undercooked GROUND beef (sorry Pierre, no tartare today) but it is important to note that bacteria cannot live in whole muscle, so that delicious medium-rare ribeye is perfectly safe.
This is only a small list of bacteria and viruses that cause food borne illnesses. A simple google search will turn up many, many results, so make sure to get your information from a reputable source. (FDA, USDA, CDC, etc).
Back to our bare-handing friends at Sam and Ella’s… Per the NC food code manual, it is required that food employees do not touch ready-to-eat foods with bare hands. Hand washing alone does not remove enough of the bacteria and viruses from your hands to allow bare hand contact with ready to eat food products. Gloves are acceptable (as long as they are used correctly), and utensils can be used so long as they do not contribute to possible contamination, (this means you can’t grab cooked chicken off the grill with the same pair of tongs you used to pull it out of the marinade of Italian dressing…yes, that’s all it is…). Employees are further required to wash their hands before donning gloves, and when switching tasks. This means you can’t go from making sandwiches to taking out the trash, to grabbing the fryer baskets, to sweeping up the spilled chips from some snotty-nosed kid, and back to making sandwiches with the same gloves. It is required of a food establishment to inform employees of their responsibility to relate information about their health and activities, as they relate to diseases that are transmissible through food, to a person in charge (PIC). It is then the duty of the PIC to reduce the likelihood of foodborne illness transmission through asking for more information, watching for symptoms of illness (vomiting, diarrhea, jaundice, etc), or more commonly, restricting or excluding the employee from work.  So, what should you do if you are at a restaurant and see a food service worker handling food with bare hands?

1. Don’t eat the food! It is ultimately your decision as to what you put in your own body. Hopefully you can make an informed decision about where you eat using the sanitation rating that should be hanging in your favorite restaurant. (We will talk more about sanitation ratings in another issue…) If you don’t see a sanitation rating hanging in plain view, you might want to ask yourself, “why?” This should be a good indication of the practices of this food establishment.

2. Ask to speak to a manager or person in charge. Explain to them what you have seen and why you are deciding not to eat the food they are serving. It is a manager’s job to make sure that the food that is being served at their restaurant is not only delicious, but also safe.

3. Submit a complaint to the food and lodging division of the environmental health department. It can be anonymous. It is our job to speak to people about food safety. We do it every day.

So, to answer your question, Cindy, you are correct…your boyfriend is crazy. Hand washing is the single most effective way to prevent the spread of infections.

And remember, most of these illness won’t kill you… but they might make you wish you were dead…

*Names have been changed to protect the innocent*